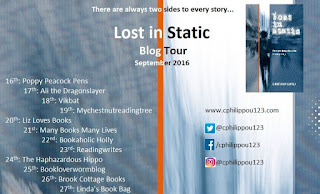 Sometimes growing up is seeing someone else's side of the story.

Four stories. One truth. Whom do you believe?

Callum has a family secret. Yasmine wants to know it. Juliette thinks nobody knows hers. All Ruby wants is to reinvent herself.

They are brought together by circumstance, torn apart by misunderstanding. As new relationships are forged and confidences are broken, each person's version of events is coloured by their background, beliefs and prejudices. And so the ingredients are in place for a year shaped by lust, betrayal, and violence...

Lost in Static is the gripping debut from author Christina Philippou. Whom will you trust?

Thank you to the author and publisher for the ARC and the opportunity to participate on the Blog Tour.

University life. A chance, to make a fresh start, to make new friends - and new enemies.

The story is told in first person point of view; with each of the major characters getting to put forward their version of events. It's cleverly done; once I realised that each scene was being described by each character in turn, so there was a little bit of a sense of travelling back in time to the beginning of each scene/incidence. It was interesting to see each person's perspective, making it easy to see how misunderstanding can happen so easily, and proving that we cannot know what is going on in someone else's mind. Never assume you know what someone is thinking!

It's interesting to see how different people react to others when placed in a rarefied situation like university. It was an uncomfortable read at times, with characters not reacting as I presumed, but this is in no way a criticism; it makes for a great read with it's twists and turns.

A great debut novel, and I look forward to reading more by Christina.

Lost in Static is available from, amongst others, Amazon UK, Amazon US, and direct from the publisher, Urbane Publications.

Christina Philippou’s writing career has been a varied one, from populating the short-story notebook that lived under her desk at school to penning reports on corruption and terrorist finance. When not reading or writing, she can be found engaging in sport or undertaking some form of nature appreciation. Christina has three passports to go with her three children, but is not a spy. Lost in Static is her first novel.

Christina is also the founder of the contemporary fiction author initiative, Britfic.

Valentine's Day at the Star and Sixpence
by Holly Hepburn
tagged: currently-reading

Stuff I love - in no particular order.