Blog Tour: The Bitches of Suburbia by Jane Owen 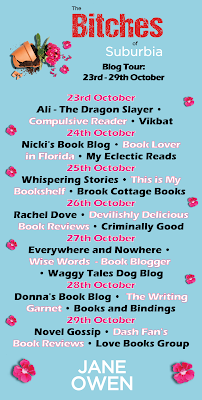 Today I'm on the blog tour for Jane Owen's book, The Bitches of Surburbia.

Nothing much ever happened on Horseshoe Lane - why should it? It was, after all, just a normal suburban backwater with the usual cross section of growing families, ageing pensioners, the occasional singleton and a brace of curtain twitchers. The arrival of celebrity couple, Heavenly and Travis, however, changes all that. This glamorous pair bring about a summer of competitive party throwing and ambitious home improvement projects that will have disastrous and completely unforeseen consequences.

Neighbours who’ve got by for years with just the occasional chat over a garden fence about the unseasonable amount of rain or the state of next door’s garden are slowly united by suspicion as a husband goes missing, a much loved cat turns up dead on a doorstep and Enid from Number Seven is found badly injured at the foot of the cliff.

Could one person be responsible for all of this? Could that person be the strange and unlikeable Hilary Jones from Number Nine? There was only going to be one way to find out and it was going to involve a lot of whiskey….

In this her wonderful follow up to ‘The Rock Star Known as Horse’, Owen’s riveting new story finds a murky side to the suburbs, a side where petty jealousies and neighbourly rivalries can escalate out of all control with calamitous results, all intricately observed with her usual dark humour firmly to the fore. 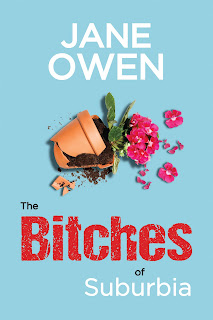 I've read a couple of books about neighbours this year, so I was intrigued to read The Bitches of Suburbia.

Unfortunately most of the story is told in the blurb, not leaving much to surprise the reader.

When I started reading the book, I found myself a little put off by overly long sentences which took up half my Kindle page, and I found myself re-reading them to try to make sense of what was written. However, as I read on and got more involved with the story, I didn't notice this so much.

Horseshoe Lane; a secluded cul-de-sac of beautiful houses, fabulous cliff-top views over the sea - what a place to live! That is until we meet the neighbours...

What a nasty, petty bunch they are! They mainly keep themselves to themselves, until the arrival of glamorous couple Heavenly and Travis. After their house-warming party, the other residents decide that partying is the life, and the competition hots up to see who can be the best hostess.

Surprisingly, the character I sympathised - or pitied - most with was the 'strange and unlikeable' Hilary Jones. She's one of society's misfits, naive, gauche, and struggles with social niceties, and cannot understand why everyone else thinks they are above her. She thinks imitation is the best way to prove her worth.

Hilary reminds me a little of Eleanor Oliphant, my literary heroine of 2017. In Gail Honeyman's  book, I grew to love Eleanor's odd little ways, and there was a reason for her being as she was, and in the end her character was redeemed, with the help of her friends. Hilary, however, is not afforded the same kindness, and the events and treatment by her neighbours makes her even more disturbed.

This is written with a very dark humour, with a sense of schadenfreude and little hope of redemption for any of the characters. I felt a sense of unease the whole way through the book, and was left with a bitter taste when I finished reading it. 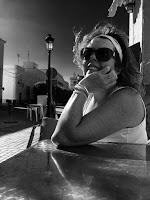 Jane's first novel, Camden Girls, was published by Penguin twenty years ago and quickly became an international cult bestseller published in many languages including Japanese, Spanish,German, Hebrew, Italian and Dutch. She'd already spent many years working in the film business working alongside stars such as Christophe Lambert, Andi McDowell, Daryl Hannah and James Remar before switching to the music business and working for bands such as The Who, Robert Plant, ZZTop and many more. Eventually, even that got boring and that's when she wrote Camden Girls.

After publication, life became interrupted by an unfortunate traffic accident and Jane moved out of London to Sussex and slowly returned to writing. Her novels don't fit into any specific category and, frustrated by endless rejections along the lines of 'You write beautifully but we don't know how to sell this book' she started self publishing. Rave reviews gave her the confidence to keep going and believe in what she was writing.

She's still in Sussex, sharing her life with her musician partner, three horses and a dog and divides her day between writing and riding.

Valentine's Day at the Star and Sixpence
by Holly Hepburn
tagged: currently-reading

Stuff I love - in no particular order.